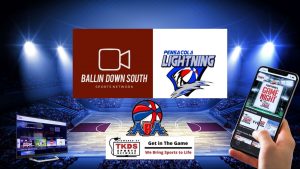 You can find out more @ http://www.ballindownsouth.com/bds-sports-network-partners-with-aba-basketball-pensacola-lightning/

The TKDS Sports Network Welcomes the Pensacola Lightning and the ABA to the Network and loos forward to a great basketball season.

The Lightning starts their season off this Saturday night against the Mobile Jesters from Mobile, AL at Pensacola State College Milton Campus in the Bo Johnson Center at 7 pm. CST Followed up by a Sunday game against The Atlanta Storm at 5 pm CST in the Bo Johnson Center. If you can’t make it to the game catch the live broadcast on the Ballin Down South Sports Network.  @ http://www.ballindownsouth.com/pensacola-lightning-live-broadcast/